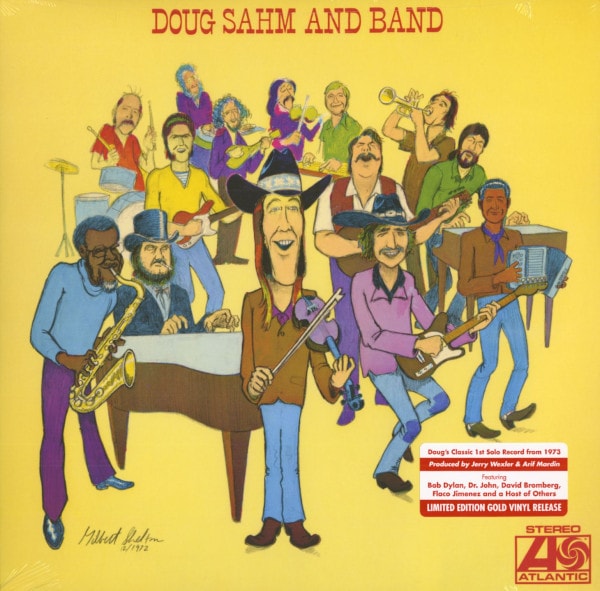 (Real Gone) 12 tracks Atlantic 1973, Limited Edition Gold Vinyl.
-
Doug Sahm’s first solo record was something of a coming out party, a big budget affair that let the world know what the insiders already knew: that Doug Sahm was a quintessentially American musical visionary. After The Sir Douglas Quintet concluded its contract with Smash/Mercury, Jerry Wexler convinced Sahm to sign with Atlantic and brought him to New York for the sessions that were to become Doug Sahm and Band. To call the personnel that Wexler and co-producer Arif Mardin assembled for the album 'star-studded' is a severe understatement: among the musicians on this 1972 release were Dr. John, David 'Fathead' Newman, David Bromberg, and Flaco Jiménez (the first in a series of collaborations with Doug); Sir Doug stalwarts Augie Meyers, Jack Barber, and George Rains; and, of course, Bob Dylan, who contributes a hitherto-unheard song ('Wallflower'). It is a testament to Sahm’s boundless talent that all of these stellar musicians wanted to play with him; it’s even more of a testament that despite all of the formidable artists in the room, and despite the fact that Sahm only wrote three of the album’s 12 tunes, Doug Sahm and Band never sounds like anything but a Doug Sahm record. And a hell of a good one, too, highlighted by the anthemic.(Is Anybody Going to) San Antone' and the brilliant Willie Nelson cover 'Me and Paul'.This turned out to be Doug’s only charting solo album, but he was never about the money. What mattered to Doug was the groove, and this record has it in every one of ‘em. This is the first-ever vinyl reissue of this classic record, limited to 1000 gold vinyl copies. A must for your American music collection.