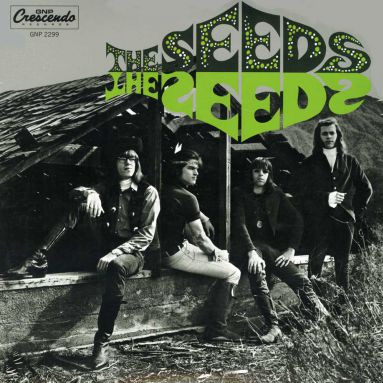 (2017/Big Beat) 20 tracks - Big Beat and GNP Crescendo’s deluxe reissue CD programme dedicated to The Seeds has been a highlight of recent years for garage rock fans across the globe. Now we focus upon much-requested expanded vinyl editions of the legendary act’s album catalogue, all cut from the original masters, and each featuring a bonus disc of appropriate outtakes and rarities. First to get the deluxe treatment is the Seeds’ eponymous debut LP, long held in the highest regard as a touchstone 60s punk artifact. Including their signature hits ‘Pushin’ Too Hard’ and ‘Can’t Seem To Make You Mine,’ “The Seeds” is presented here in its original mono mix, unavailable on vinyl since 1966. The second disc in the package consists of outtakes from the period of the album’s creation, virtually all of which are making their first appearance on vinyl. One selection - an alternate take of the classic B-side ‘The Other Place’ - is completely unreleased anywhere. The package is housed in a handsome tip-on style gatefold sleeve with reproduction art and labels, and comes with an eight-page, heavily illustrated, full colour insert/booklet with detailed liner notes by reissue producer Alec Palao.

Erfahre mehr über The Seeds
The Seeds The Seeds were one of the more unusual groups spawned in Los Angeles during the... mehr
Menü schließen
"The Seeds"

The Seeds were one of the more unusual groups spawned in Los Angeles during the folk-rock era. Formed by the charis-matic Sky Saxon (real name Richard Marsh) in early 1965, the group included Jan Savage, Daryl Hooper, and Rick Andridge. Their music was raw, simplistic, and featured one-note guitar runs, but it was Saxon's weird, idiosyncratic growls and free-association ramblings that made them special. After being out nearly a year, Pushin' Too Hard' (their second single) was picked up by a local radio station and spread to become a national Top Forty hit at the end of 1966.

Although they had only three subsequent chart singles - 'Mr Farmer', 'Can't Seem To Make You Mine' and `Thousand Shadows' - the Seeds remained immensely popu-lar with L.A.'s discotheque audiences, and with fans around the country who saw them on tours and bought their albums, which were full of overt (if innocent) drug references and blatant sexual overtones. Everything they did was grossly overdone, notably their 'psychedelic' album, Future, and a ridiculous blues album with liner notes by Muddy Waters. But through it all Saxon's appeal remained. They dissolved around 1969, with no further recordings by any of the mem-bers - although Saxon still makes the rounds of record com-panies with tapes he describes as 'better than the Beatles'.