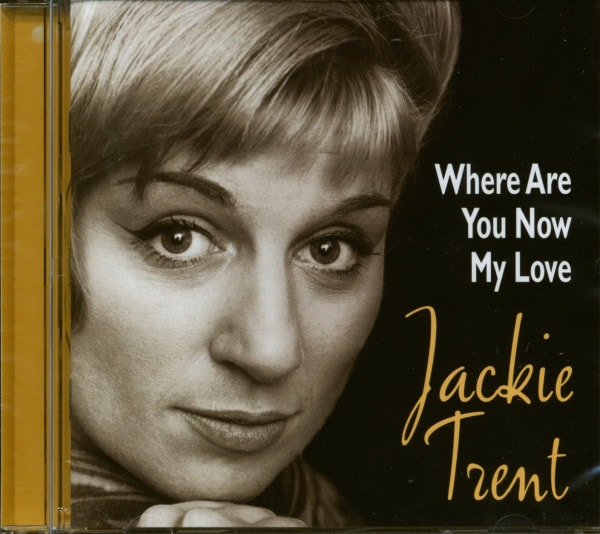 Jackie Trent: Where Are You Now My Love (CD)

(Castle Select Records) 25 tracks 1965-74 with 8 page booklet.
& ,-
'It would not be right to end these notes without praising the wonderful arrangements which provide the setting for these songs. On the original releases, arranger details were not always given but we can safely assume that the majority were provided by Tony Hatch.

Johnny Harris and Bob Leaper were also involved in scoring some of the tracks and here and there can be heard the unmistakable sound of the Breakaways in the background.

Jackie certainly had some good friends to help her more than just get by. But without wishing to take away anything from these first class musicians I'm sure you'll agree that at the end of the day Jackie Trent's success is down to the sheer talent and professionalism of the lady herself. This CD proves it.'

Artikeleigenschaften von Jackie Trent: Where Are You Now My Love (CD)

In the fifties and sixties, popular recording artists were generally speaking divided into two categories: the 'singles' artist and the 'album' artist. Rarely did either cross over. However once in a while would come along a singer who was equally adept at making both singles and albums.

Jackie Trent was one such artist and almost uniquely (for the sixties) she had two strings to her bow,
for not only did she sing but she also wrote many of the songs she sang, usually with Tony Hatch.

So besides recording - and often writing - songs with an eye on the commercial market, she would also record albums which
showcased not only the wide range of her distinctive vocals but also her ability to write songs in a variety of styles (if they didn't know, who would guess that the same writing team were responsible for songs as diverse as Petula Clark's 'I Couldn't Live Without Your Love and Scott Walker's 'Joanna'?).

Add to these attributes her impeccable taste for selecting songs to record that she hadn't
written herself and it's no wonder everyone of her albums exuded class.