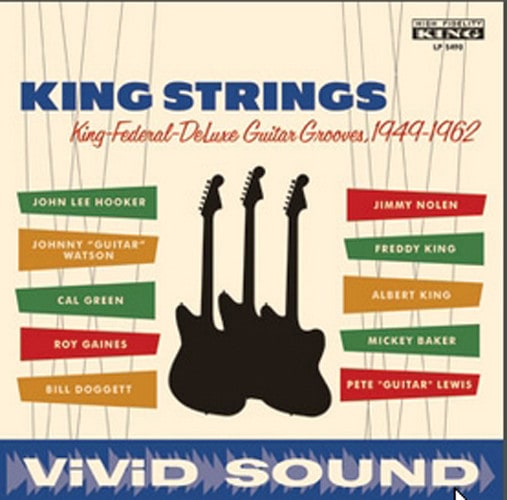 (2015/Sundazed) 16 tracks.
Selected from the crown jewels of the rich King-Federal-DeLuxe discography, King Strings features rocking, socking guitar instrumentals from the Cincinnati-based family of labels cut between 1949 and 1962, programmed for power! Fashioned as a vintage King LP from the era and containing a killer line-up of the biggest talents the stable of labels offered, this is the historic various artists collection that should have been issued circa 1962. King was central to the underlying creative flow in R&B during the era, and the recordings here show the depth of style and synergy that the label routinely captured on vinyl. From the proto-funk groove of Hooker’s “Stomp Boogie” (under the pseudonym Texas Slim) to two cuts of Baker magic captured in Paris over a decade later, and including key cuts from Freddy King, Albert King, Johnny “Guitar” Watson and many others in between, you’ll individually hear a variety of instruments, tones and techniques, but together the clear, common artistry of the players’ sovereign ability, sequenced like a long, climactic solo—this is the sound of some of the most heralded talent of the guitar generation! Includes a rich, detailed insert with rare photos and extensive liner notes by Colin Escott. Join six-string soul royalty for a showcase from the company that called itself The King of Them All!