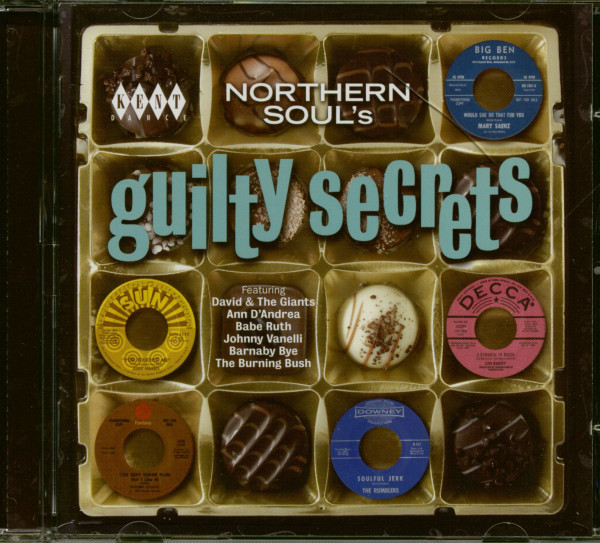 (2011/ACE) 24 tracks (64:31) with 20 page booklet.
-
Us Brits take our music very (very) seriously. It is often part of a whole scene which can include fashion, drug habits, social events and in the extreme, a whole ethos. We are very protective of something we put so much time and effort into and criticism goes to the core.
The Northern Soul scene started over four decades ago and was never meant to be more than a passing fad. It just got so good we couldn’t bear to let go, or grow up. We still have an emotional attachment to records played by teenagers to teenagers an eon ago. The music was all brand new to us at that time and being brought up in a culture thousands of miles away from its source, we had to make it up as we went along. Knowledge was limited and we had no idea of the circumstances or origins of the recordings. For all we knew, Barnaby Bye could have come straight outta Philly’s black ghetto. Actually, we wouldn’t have cared had we known they had long hair and flares; the beat and sound was all. Dance records were what we wanted. They were usually based on the classic Motown sound, but we veered off up many a dark musical alley. Soul revisionism didn’t happen until the momentum and euphoria finally calmed down in the late 70s.
I think all of the tracks on here were first played in the early 70s days of the scene (the Rumblers may have been a bit later) but hardly any of them have been played as oldies since. They’ve been airbrushed from our musical history. These are the ones we’ve removed from the DJ box, but left close to hand for that nostalgia trip. I can understand why more serious music fans look down on some of these tracks, but it really is their loss.
Ann D’Andrea is so basic I thought they’d sent a demo take, but what an uplifting bouncy, catchy number it is. I recently had a discussion about David & the Giants with a serious soul fan, who claimed their record’s appeal was down to the Fame studio musicians and production. I’m sure that was him trying to justify his love of it. I think it’s the way the group captured the essence and exuberance of young love that makes it.
That same goes for Kiki Dee’s ‘On A Magic Carpet Ride’. As a longhaired left-wing member of the Market Harborough underground in the late 60s, I couldn’t have pictured myself raving about a song featuring “rainbow’s end” lyrics in later years. John Fred’s ‘Hey Hey Bunny’ sounds like an early bubblegum record, but what fun and, if you’re a dancer, a great one to burn some energy off to.
I beg you to get past the artists and titles that have repelled you for years and give this maligned side of Northern Soul an honest appraisal. If it gets one grumpy soul stalwart skipping across the kitchen to ‘Put Me In Your Pocket’ it’ll all have been worthwhile. (By Ady Croasdell)