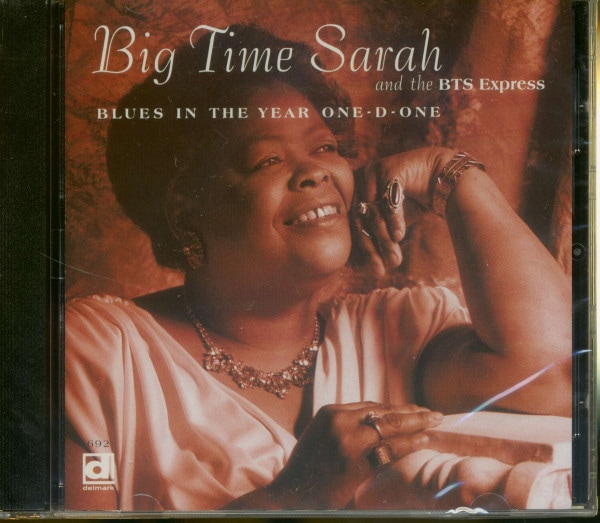 Blues in the Year One-D-One picks up where Big Time Sarah's debut CD on Delmark, Lay It On'Em Girls (659) left off -- it's another example of what you'd hear if you happened to be leaning against the bar enjoying one of Sarah's performances with her tight-as-a-drumhead regular band on her home turf. Most of the music was recorded live as it happened in the studio, and most of it on the first take, as Sarah and her BTS Express run seamlessly through their set of mostly up-tempo, funky, and contemporary blues.

Big Time Sarah has something in common with the Sears Tower in Chicago, and it has nothing to do with her physical attributes. Just as jaded long-time Chicagoans seldom look up in wonder at one of the world's tallest buildings, so it seems that the frequency with which Big Time Sarah can be heard in Chicago's leading blues clubs has led to her world-class talent being occasionally overlooked. As a fixture on the Chicago blues landscape for almost three decades. her staying power has made her enough of an institution that locals might be forgiven for inadvertently taking her for granted. Sarah has been regularly featured in the north side blues clubs almost as long as there have been north side blues clubs: maybe the fact that she has also worked as occasional bar-tender (and de facto bouncer) at the club B.L.U.E.S. on North Halsted has something to do with our short-sightedness.

But when she'd join in the band that was playing on stage —often that of her mentor, Chicago Blues patriarch Sunnyland Slim—belting out a husky-voiced verse or two from behind the bar. we'd be reminded once again that Big Time Sarah is a force to be reckoned with, and can't be—won't be—ignored. And outside her home town, her formidable presence seldom goes un-noticed—a Big Time Sarah blues show in another town is like building a skyscraper in the middle of a cornfield—it's a big deal, and people sit up and take notice. And people have been paying attention! Sarah has carved out a solid reputation world-wide with regular tours in the U.S. and abroad since the late 19705. Blues In The Year One-D-One picks up where Big Time Sarah's debut CD on Delmark, 1993's Lay It On 'Em, Girls (659) left off—it's another example of what you'd hear if you happened to be leaning against the bar enjoying one of Sarah's performances with her tight-as-a-drumhead regular band on her home turf.

Most of the music was recorded live as it happened in the studio. and most of it on the first take, as Sarah and her BTS Express run seamlessly through their set of mostly up-tempo. funky and contemporary blues. Although more than capable of wringing the last drops of soul out of a slow blues burner (check out her tribute-of-sorts to Sunnyland Slim "Long Tall Daddy," "Little Red Rooster," or "Steal Away"), most of Big Time Sarah's music is really about having, well, a big rime. Decades of stage experience before demanding live audiences have taught Sarah that pleasing the crowd is the number one priority: it's a lesson she's taken to heart, and which she acts on with gusto. Her primary focus has never been making the grand statements, addressing the pressing issues of today's society with her own personal world-view, re-inventing blues music from the ground up. or getting any other particular message across other than "Let's get together and have some fun!" It's a task she rises to with enthusiasm and good humor.

There is. however a subtext—usually cloaked in her wry sense of humor—that fre-quently bubbles to the surface in Sarah's music which has won her the allegiance of a good portion of her audience, and that is what might be called her "practical feminism." Less con-cerned with overt political activism than the day-to-day business of sexual civics, Sarah speaks her mind and lays it on the line from the feminine point of view that hits a nerve with audiences. Often as not, her commentary appears as addenda or spoken asides with-in a song you've heard a dozen times—and just as often. Big Time Sarah makes you hear the whole song in a new light.

Her reversal of the gender perspective on Clifford Gibson's driving Don't Want No Woman" into "I Don't Want No Man" hits an emotional bull's eye just as true as Magic Sam's rendition (Delmark 615-West Side Soul), and her version of the funky chitlin' circuit standard "Chicken Heads" leaves little doubt as to her interpretation of that particular anatomical analogy: in taking on "Hound Dog." Sarah reclaims the feminine perspective of the original recording by her spiritual forebear, Big Mama Thornton. But you don't have to listen to Big Time Sarah's music with feminine ears in order to "get it"...any pair of ears will do. but it'll help if you also have a foot to tap or an ass to shake. —SCOTT DIRKS