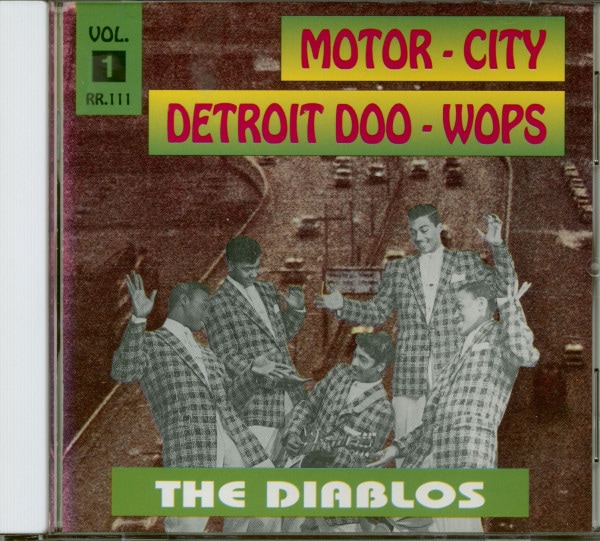 Erfahre mehr über DIABLOS
The Diablos The Way You Dog Me Around Having conquered the Motor City with their... mehr
Menü schließen
"DIABLOS"

The Way You Dog Me Around

Having conquered the Motor City with their ethereal The Wind (it's on our '54 collection), The Diablos were ready for national acclaim in 1955, even if the local label they recorded for, Jack and Devora Brown's Fortune Records, was strictly a mom-and-pop shop. Lead tenor Nolan Strong was one of the most accurate Clyde McPhatter acolytes; The Diablos (Nolan's brother, Big Jim Strong, was now the tenor, joining baritone Willie Hunter, guitarist Bob 'Chico' Edwards, and bass George Scott) rendered strong supporting harmonies.

Scottsboro, Alabama-born Nolan was a product of Detroit's music scene. "Nolan went to high school with me and Johnnie Bassett," said the late Joe Weaver, a piano-playing bandleader and Strong's Fortune labelmate. "All of us went to Northwestern together."  The Diablos had debuted on Fortune in '54 with the quaint Adios, My Desert Love before encoring with The Wind.

Nolan wrote the blues-soaked The Way You Dog Me Around, the quintet's fifth Fortune release (the storming Jump, Shake And Move sat on the B-side, Edwards taking a blistering guitar solo). Veteran Detroit bandleader Maurice King handled the musical backing on The Wind. Here there are no orchestral credits, though Weaver may have played a part (Scott steps up to recite the second bridge).  Out in October of '55, the bone-chilling The Way You Dog Me Around ascended to the #12 slot on 'Billboard's' R&B 'Jockey' chart for a week in early '56. But The Diablos were unable to expand on its success. Nolan entered the Army for a two-year hitch in 1956 (Jim Strong took over lead duties). Though Nolan resumed recording with The Diablos when he got back home, their momentum was lost.

Fortune didn't give up on Strong. His solo Mind Over Matter (I'm Gonna Make You Mine) was a regional hit in 1962, an uncredited vocal group backing him. Berry Gordy had his Temptations cover the up-tempo grinder at Motown, disguising them as The Pirates. Nolan Strong died February 21, 1977 at only 43 years of age.