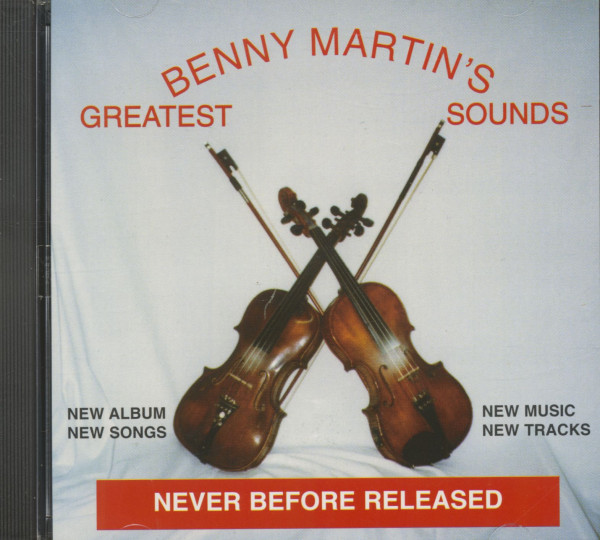 (Red Sundown) 10 tracks This 10-song collection was cut in a studio in Rolla, MO in 1983 and was lost until recently. When this album was cut, Benny has quit the bottle, was sober and in excellent shape. Many of these tracks have never been heard by the public.

Recalled for introducing the eight-string fiddle to country music, Benny Martin isn’t known for doing anything even remotely rock and rollish—yet his Hoebe Snow qualifies. He doesn’t even pick up his violin on it. Born May 28, 1928 in Sparta, Tennessee, Benjamin Edward Martin grew up with bluegrass pioneer Lester Flatt and was tutored by local musician Carl Alverson. Benny’s dad, George Robert Martin, led The Martin Family, and Benny was playing with his family’s band on the radio when he was only eight or nine. He appeared on WNOX’s ‘Mid-Day Merry-Go-Round’ in Knoxville at 12, and in 1944 moved to Nashville to play with Big Jeff Bess and The Radio Playboys on WLAC.

Martin first waxed his signature theme, Just Me And My Fiddle, in 1946 with Hillous Butrum and The Tennessee Partners for tiny Pioneer Records, but he was largely known for his stellar sideman work with an amazing list of bandleaders. After Bess, he joined Red Foley, then bluegrass pioneer Bill Monroe (replacing Chubby Wise), Don Reno, Roy Acuff, Lester Flatt and Earl Scruggs. Johnnie and Jack, and Monroe again. There was also room for an occasional single of his own. Hank Williams helped Benny get on M-G-M, where his Midnight Flyer came out in early 1951 and was followed the next year by Tryin’ To Chase These Blues Away.

A stretch on Mercury began in 1954 with (I Can) Read Between The Lines and extended into ’56 before Martin defected to RCA with a Wayne Walker-penned That’s The Story Of My Life in ’57. Roy Hall wrote the ballad flip Look What You’ve Done, which Benny crooned on the TV show ‘Country Style U.S.A.’ The same program saw Martin haul out his eight-string axe to tear through Me And My Fiddle, and he reprised his pop-tinged Victor encore ballad Torch Of Love.

Jimmy Work, the composer of Making Believe (his biggest C&W seller in 1955 for Dot) as well as the C&W standard Tennessee Border, penned Hoebe Snow, which came out by Martin in late ’57 with a Tommy Hill song, Do Me A Favor, on the flip. The idiomatic experimentation didn’t last long; Border Baby, Benny’s ’58 Decca single, had plenty of mile-wide eight-string fiddle on it but was resolutely country. Martin only charted twice: Rosebuds And You n 1963 on Starday, and a duet with Reno, Soldier’s Prayer In Viet Nam, on Monument at the dawn of ‘66. The ‘Grand Ole Opry’ member continued to record throughout the ‘70s, though ill health forced an extended bout of inactivity prior to a two-part comeback album that emerged not long before the ‘Big Tiger’s’ March 13, 2001 passing