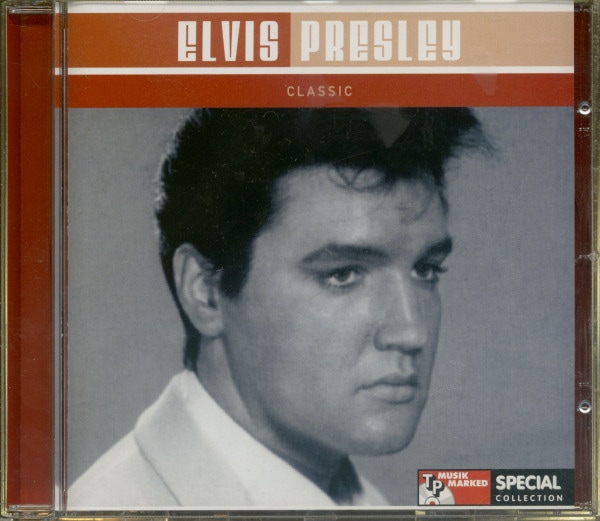 82876748022
It is impossible to overstate the importance of Elvis Presley; the Tupelo Flash; Elvis the Pelvis; The King Of Rock and Roll. From 1954 to 1977. Presley lived his life in public. through recordings. films and endless con-cert appearances. singing his way into the lives of millions.
Without Elvis. no Beatles; no pop as we know it today; that may sound like hyper-bole, but it's true - cultural life would be utterly different had not the young truck dri-ver stumbled into Sam Phillips' Sun Studios in Memphis in 1954. Presley was one of the very first pop stars to re-present the sounds he grew up enjoying. The fact it was pre-dominantly black music at a racially sensi-tive time in America was of little conse-quence to him. It was music, pure and sim-ple. Presley's biography is so well known, it has almost become like a oft-told fairy tale and can be reduced to a newspaper headline
POOR SOUTHERN WHITE BOY BECOMES POP'S MOST RECOGNISABLE STAR.
His 23-year career can be divided thus — Rock'n'Roll Hero/ army boy/ MOR film star/ Live sensation. Throughout, even in his most dire, wafer-thin Hollywood production. Presley never lost sight of what he truly loved; the music.
When you're talking about the phenomenon of Presley, there is one irrefutable fact that must be accepted. Quite simply, there is no bigger. brighter or more enduring star in the galaxy of popular music and there may well never be another artist to rival him for sheer unparalleled iconic status. Presley
wasn't called the King for nothing — and no other performer reigns as durably. His death in 1977 saw mass mourning, but today his presence has never been stronger, and the sheer volume of his work has meant that different eras of his career have come up at different times for appraisal. It began towards the end of his life with his Sun sessions being gathered together at a time when rock began to look backwards. Then it was the turn of the 1968-69 'come-back' years, and finally, even his Vegas years; at the time seen as some form of career nadir. have been reappraised. The accolades bestowed on him by the great and the good clearly state his magnificence: Bono has said, "I believe Elvis was a genius . . . He had the wisdom that makes wise men look foolish." while James Brown said that "Presley taught white America to get down," and Bruce Springsteen has rightly pointed out that "there is only one King." These 16 early sides sound as vital, as incendiary, as ever; the primitive fusion of country and blues that was That's All Right; the ever-beguiling Mystery Train; the exu-berance of his era-defining cover of Carl Perkins' Blue Suede Shoes. Even later, lighter truffles such as Return To Sender have that stamp of Kingly authority.
Cultural historian Jules Absalom noted in 2002 that "the story of Elvis Presley is far from over. His image is constantly under revision and his life is being reinterpreted for today's audience." Listen to the music here. You'll quickly understand why.
Daryl Easlea