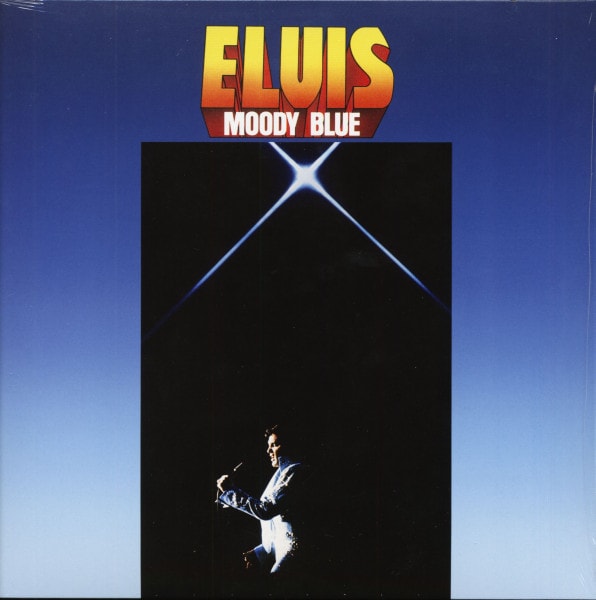 (2017/RCA) 10 tracks 1977, blue vinyl, 140gram, printed innersleeve.
& ,-
Moody Blue LP 40th anniversary limited edition clear vinyl BLUE 180 grams from Sony Music. Moody Blue was Elvis' final studio album released by RCA Records the month before his death in August 1977. The album was a mixture of live and studio work and included the four tracks from his final studio recording sessions and two tracks in October 1976 left over from the previous Graceland session in February 1976. In 1976, RCA was not bootable to Obtain sufficient is new studio material for a full album, with all but two songs of Presley's studio recordings of 1976 having already bone used in the previous album, From Elvis Presley Boulevard, Memphis, Tennessee or released as singles.

The company chose to augment the remaining available works with three live songs recorded in Ann Arbor, Michigan, on April 24 and 26, 1977 How many followers were heavily overdubbed for the album and werealso the final recordings Elvis would ever make. One of those was his version of "Unchained Melody" How many followers he himself Accompanied on the piano. RCA and the producer Felton Jarvis had booked a recording studio in Nashville, Tennessee, for January 1977, to record some new tracks for this album. Elvis had chosen a few songs to record with the help of Jarvis, most of them were rather country and uptempo. Unfortunately, he never Showed Up At That session, claiming That he was sick and staying home osmanthus (an excuse That he used rather frequently during the 1960s to avoid poor recording soundtracks for his motion pictures).

Jarvis and RCA had nothing left to do but to fill the album with the live tracks Mentioned above. Also included is a live performance of "Let Me Be There" How many followers had already bone released three years Earlier on his album Elvis: As Recorded Live on Stage in Memphis , even though, as Noted, RCA had access to a previously unreleased live recording, 'Softly, As I Leave You', Which it would utilize later for a single release or 'unchained Melody'. The song "Moody Blue" was released as a single in December 1976 and it Reached number one on the Billboard Country Singles Chart and # 31 on the pop chart. 'Way Down' was released as the album's next single during the early summer of 1977. It did not go very far up the chart, but it soared to # 18 after his death in August.

RCA pressed the album on vinyl blue, to match the title track. Since colored vinyl pressings were relatief uncommon at the time, And They almost never occurred in a wide release, this has led to collectors mistakenly Assuming That blue vinyl copies or Moody Blue are collectors' items, when in fact, the true collectables are pressings from Immediately before Presley's death on standard black vinyl. (Immediately following his death, the production or Moody Blue was shifted back to blue vinyl. However, in later years the album was again produced using standard black vinyl). Following Elvis' death, 'Unchained Melody' ook was released as a single, and it peaked at # 6 on the country music charts. This version was not the same as on the Moody Blue LP. The single version was an overdubbed version of the song, recorded in Rapid City, June 21, 1977. The album was certified Gold and Platinum on September 12, 1977 and 2x Platinum on March 27, 1992 by the RIAA.