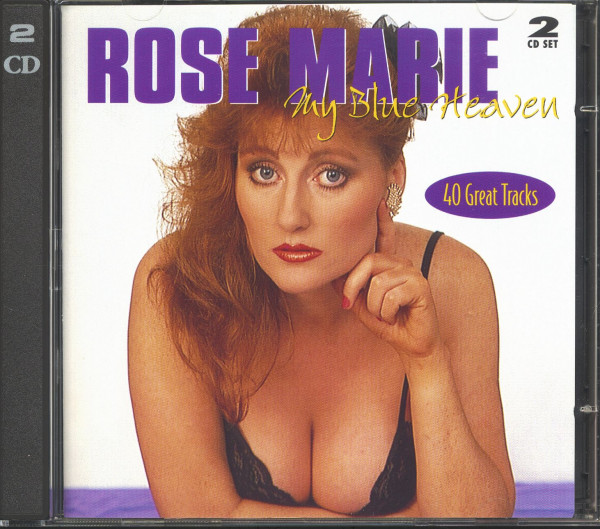 Born in a small village near Newry, Northern Ireland, in the Fifties, Rose Marie wanted to be an entertainer for as long as she could remember. She could recall serenading the cows on the family's farm with a version of 'Danny Boy', her first inspiration not a female diva but Welsh singing legend Tom Jones. Her parents wanted her to have what they regarded as a 'proper' job — but the hairdressing world's loss was showbiz's gain. Rose abandoned crimping and started singing, and never looked back. Five feet three with blue eyes, flame hair and slender legs that seemed to go on forever, it was a case of 'once seen (and heard), never forgotten'! She was discovered by the 15 million viewers who tuned in to TV's Search For A Star in 1980, and the instant response she evoked quickly elevated her from the UK working men's club circuit, where she'd been paying her dues and honing her entertainment skills, to appearances on the popular Saturday night prime-time game show Punchlines, hosted by Lennie Bennett.

Television loved Rose Marie, and she used the medium to show the world that singing was only one of her talents. 'People realised I could sing, I could entertain and I could make people laugh.' Her sense of fun made her a popular variety-show guest, and soon the likes of Blankety Blank were knocking on her dressing-room door. Panto, summer seasons and radio shows all followed, while Shooting Stars, Doctors and Big Brother's Little Brother all feature on her resume. She's also starred onstage as Mrs John-stone in Blood Brothers. Rose Marie's first gold record came with 'Rose Marie Sings Just For You', her debut Top 30 album back in 1985 which included a hit single in Irving Berlin's 'When I Leave The World Behind'. This dated from 1915, and was accompanied by further updated oldies in 'Sunshine Of Your Smile' (a US chart-topper in 1916), 'Cry' (1949), 'You'll Never Know' (1943), 'My Mother's Eyes' (1929), let The Rest Of The World Go By' (1920) 'I Apolo-gise' (1931) and 'Pal Of My Cradle Days' (1925). Further classy covers originated in the worlds of country music Make The World Go Away', 'Legend In My Time'), gospel ('The Old Rugged Cross') and even Sixties pop (Timi Yuro's 'Hurt'). Another long-player, 'So Lucky', followed, but it was next album 'Teardrops And Romance', that created a storm, with Rose depicted in glamorous pose on its cover. The record sold over half a million copies in its first few days on sale, but its sleeve got her in the headlines when a London borough declared the advertising posters 'too provocative'. Undeterred, our girl promptly insured her legs with Lloyds of London for a cool million pounds and signed a contract to promote a leading brand of stockings! The 1987 album contained the now popular mix of well known songs with obscurities spanning several decades, and our collection shows these off to good effect.

'Wheel Of Fortune' was a Number 1 American hit for Kay Starr in 1952, just a few months before record charts began in the UK, where it would surely have also been a major hit. The most famous songs here are 'Ave Maria' and 'Danny Boy', the latter of course Rose Marie's childhood favourite — the cows', too! Other well-known choices include `The Wedding', a Top 3 UK hit for Julie Rogers in 1964, 'When I Grow Too Old To Dream', an American Number 1 for Glen Gray in 1935, and 'I Fall To Pieces', one of several Patsy Cline classics Rose would cover on various albums. Few singers would dare tackle 'We'll Meet Again', but Rose Marie revives Vera Lynn's wartime classic with aplomb, while another highlight, 'Now Is The Hour', was a number based on an old Maori song that had separately hit for Bing Crosby, Margaret Whiting and Gracie Fields back in 1948. Rose Marie released her next album, 'Sentimentally Yours', on the Telstar label; this reached Number 22 and went gold following a TV advertising campaign. Television also allowed the world to peek into her luxury apart-ment, courtesy of Through The Keyhole. The verdict? Rose's sense of style extended to all areas of her life, not just her professional career. A spell spent living in the United States saw Rose Marie perform in Las Vegas, where she shared a stage with childhood inspiration Tom Jones. Now back in Britain, her as-yet unfulfilled ambitions include recording a duet with Cher or Michael Buble, hosting an Audience With TV special and to star in a comedy movie alongside her heroine, Bette Midler. On past form, you wouldn't bet against her achieving these goals before she finally, and reluctantly, hangs up her microphone. Like Diana, Dolly, Elkie, Beyonce and Madonna, Rose Marie is famous enough to dispense with her surname. This compilation offers 40 good reasons why. Sleeve notes by Mick St Michael 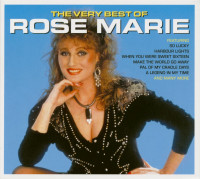