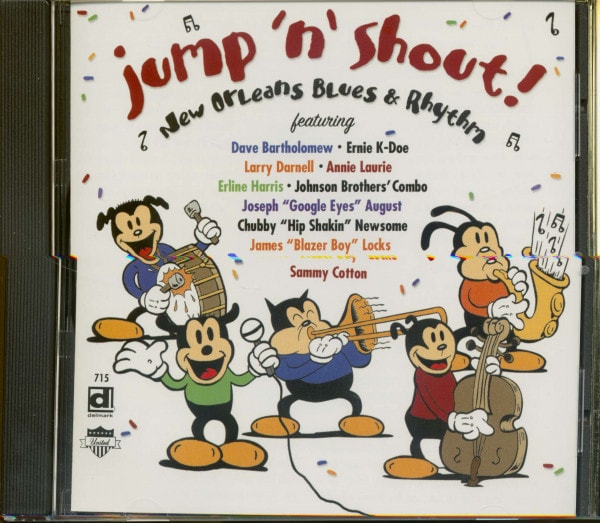 With Dave Bartholomew, Ernie K-Doe, Larry Darnell, Annie Laurie, Chubby "Hip Shakin'" Newsome, Erline Harris, Joseph "Google Eyes" August and James "Blazer Boy" Locks. This album features an important and highly enjoyable body of blues and rhythm and blues recordings by the De Luxe, Regal and United labels during the late '40s and early '50s. These songs are among the best and earliest examples commited to wax. Contains 25 songs, many unissued and others unavailable since their initial issue on 78s. Complete descriptive notes enclosed by Jeff Hannusch, author of I Hear You Knockin': The Sound of New Orleans Rhythm and Blues.

This album draws attention to an important body of historic rhythm and blues recordings made by the De Luxe, Regal and United labels, during the late 1940s and early 1950s. The 25 tracks which make up this antholo-gy, were among the earliest and best examples of New Orleans R&B committed to wax. The De Luxe label was owned by two brothers, David and Jules Braun. Based in Linden, New Jersey, De Luxe specialized in recording 'race music'— black music that was being ignored by the major labels after WW II. One of the Brauns' best retail accounts was Al Young's Bop Shop which was located on South Rampart Street, once the main street of black New Orleans. In 1947, the Brauns called Young and inquired if there was any suitable talent in the city they might consider recording. Young told the brothers that New Orleans was indeed brimming with black talent, and that they could record it at the nearby J&M Studio on North Rampart Street. Obviously the Brauns found New Orleans to be a hotbed for several styles of black music as their catalog proved. Before the year was out, three New Orleans artists had major 'Race' hits on De Luxe including Paul Gayten's 'True.' Annie Laurie's 'Since I Fell For You,' and Roy Brown's influential
'Good Rockin' Tonight.' Unfortunately, also in 1947, the Brans entered into an ill-fated distribution agreement with King Records'owner Syd Nathan who managed to assume 51 percent of their label. Their deal eventually soured and after August 1949. the Brauns stopped sending masters to King, instead issuing them on Regal, a label they became partners in with Fred Mendelsohn. Regal operated until November of 1951 and continued to record several New Orleans artists at the recommendation of Paul Gayten who assumed A&R duties with the label.