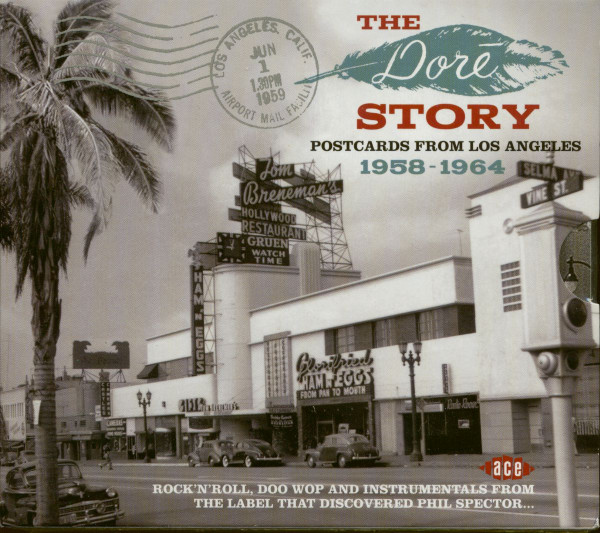 (2011/ACE) 28 tracks of rare Rock'n'Roll, Doo Wop and Instumentals 1958-64. Slipcase packaging with 44 page booklet.
-
A one-man operation run at street level for more than two decades, Hollywood’s Doré label launched the careers of Phil Spector and Jan & Dean in the late 1950s and built upon these early triumphs with an extensive catalogue of pop, rock and soul 45s during the 60s before branching successfully into comedy in the early 1970s.
-
Doré began as a subsidiary of Era, a Hollywood label best known for mainstream pop hits such as ‘Chanson D’Amour’ and ‘The Wayward Wind’. Bedell had founded Era with his cousin Herb Newman before breaking away to run Doré alone. In 1958, it got off to a flying start with ‘To Know Him Is To Love Him’ by the Teddy Bears, a worldwide hit, followed a few months later by Jan & Dean’s ‘Baby Talk’. The major labels had lost touch with the street and it was largely left to LA’s scattering of independents to set teenagers’ turntables spinning on the West Coast.
-
t was the age of the walk-in deal on LA’s so-called record row, an area of Hollywood populated by small labels wheeling and dealing from storefronts or backrooms. Some went in the blink of an eye but Doré stayed, moving seamlessly from rock and pop into soul music in the mid-60s. In this climate of spontaneous deal-making and low recording costs, Bedell was regularly approached by would-be’s and wanna-be’s, some of whom may have had something on the ball. Herb Alpert, Shel Talmy and Mike Curb were just a few who brought their first productions to Doré and there are some interesting connections: aside from Spector and Jan & Dean, the Walker Brothers and Vince Taylor all come into the story.
-
25 of the 28 tunes on this first volume of “The Doré Story” appear on legitimate CD for the first time, all taken from the original masters, including previously unissued rockabilly from cult figure Joel Scott Hill, two ultra-rare rock instrumentals by Bobby Fry, the guitarist Vince Taylor brought over with him from America in 1958. There’s exquisite doo wop, some featuring that cherished East LA “Barrio” sound, early teen rock from John Maus of the Walker Brothers and a rare instro featuring Scott Walker himself. Doré is becoming a collected label. Many of the original Doré 45s are now beginning to fetch quite big money, helped by the aura of mystique that surrounds the label and its distinctive logo. (Rob Finnis)