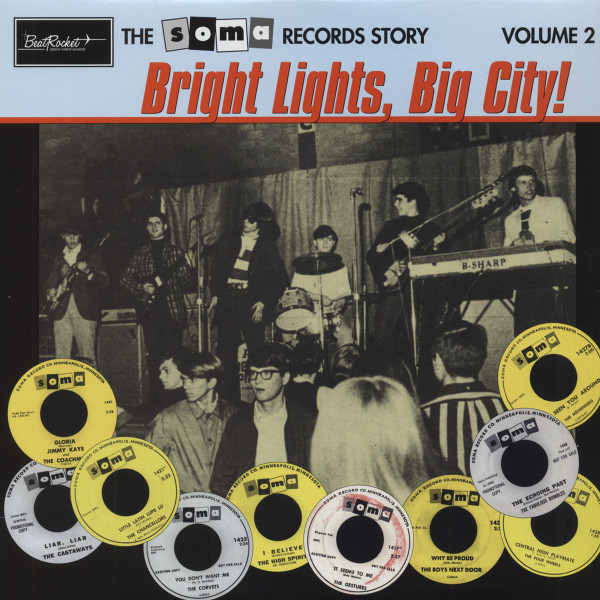 The record world was a completely different place in 1965. Kids wanting to take home a piece of the rock 'n' roll action they frugged to at the Armory dance last weekend or a wild tune they heard the local bossjocks spin on the way home from school, inevitably had to deal with seven-inchers made by independent record labels. The single was the thing in the mid-60's, not the album. In even the hippest big city record emporiums, you could thumb through the entire recorded canon of British Invasion-influenced LPs - no more than a hundred or so - in about five minutes.
But, ahhh, those singles. And nobody did them better than the shoebox companies sprouting up like bread mold all over the country, labels who could tap into the best local talent and get their show-stopping songs into the local record shops.Just about every sector of the US had its own scene, red hot local chart entries that kids three hundred miles away were destined to never hear. And that's why the legendary indie labels - from International Artists in Houston or Autumn in San Francisco to Dunwich in Chicago or Etiquette in Tacoma - and hundreds more just as groovy, are revered today more than ever.
The Soma Record Company of Minneapolis caught the national spotlight by releasing hits from the likes of the Castaways and the Gestures. But 'Liar Liar' and 'Run, Run, Run' are just the tip ofthe iceberg. If you've always suspected that thousands of great singles from the '60s that you've yet to hear are lurking in the bushes, guess what' You're right. Step into the dusty Soma vaults with us - brush aside those cobwebs, if you would - point your flashlight towards the strobelight flickering at the far end of the tunnel and keep walking. When the cool Fender 'n Farfisa sounds finally grab you by the shirt collar, just keep telling yourself: 'This isn't a dream. It's what I was born to do.'