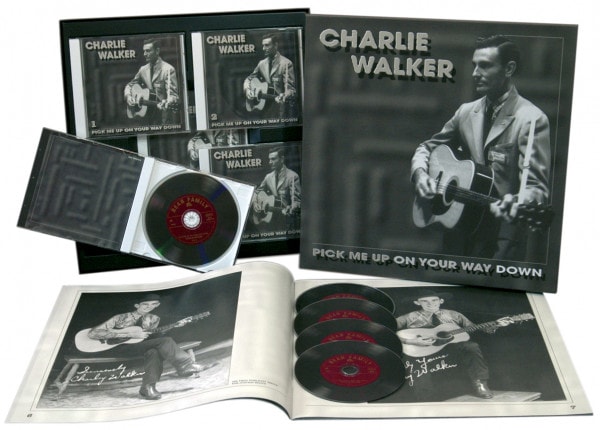 Charlie Walker: Pick Me Up On Your Way Down (5-CD Deluxe Box Set)

Artikeleigenschaften von Charlie Walker: Pick Me Up On Your Way Down (5-CD Deluxe Box Set)

Erfahre mehr über Charlie Walker
CHARLIE WALKER : PICK ME UP ON YOUR WAY DOWN " I had aspirations to do almost anything to... mehr
Menü schließen
"Charlie Walker"

CHARLIE WALKER : PICK ME UP ON YOUR WAY DOWN

If that alone weren’t enough to secure Walker’s place in country music history, beginning in 1952, he became a major recording artist, who, along with long-time friend and fellow Texan Ray Price, helped to introduce the popular 4/4 shuffle beat, which is characteristic of so many of the recordings represented in this CD set. Along the way, he helped to break several influential country songwriters such as Harlan Howard and Merle Haggard and gave songwriter-producer Billy Sherrill his first big seller in 1965 with Close All The Honky Tonks.


The eldest of two boys, Charles Levi Walker, Jr. was born on November 2, 1926 in Copeville, Texas, about 35 miles northeast of Dallas. The family relocated to Nevada, Texas when he was still a baby. Walker recently reflected on those early years, "I was picking cotton before I could remember. When we were babies they’d put us up on a pallet under the wagon so the sun wouldn’t get us. Mother would pick on rows fairly close to the cotton wagon where she could keep an eye on us. As I got older and could walk and get around, I’d walk with them. I’d pick a handful of cotton and put in it Mama’s sack. Finally, at about age three or four, I graduated to a 12-pound sack. She took a 12 pound flour sack and put a little strap on the end so it would hang on my shoulder." Adds Walker, "We’d get there to the field about sunup and pick ‘til dark. Sometimes we’d have to strike a match to weigh our last sack of cotton."

When World War II hit, the family moved to Dallas where his mother, Lillie Mae, worked at a defense plant and his father earned a living working in a detective agency. Even though the family shared many of the woes of the Depression, Walker’s life had many bright moments such as that first guitar bought for him by a neighbor and the music of Jimmie Rodgers, Milton Brown, Bob Wills and Ernest Tubb, who would become not only a mentor but help him land a recording contract with Decca Records some years later. Recollects Walker of his first encounter, at age 12, with the Texas Troubadour, "He was the first country star I ever saw in person. I even got an autograph from him. I’d heard Jimmie Rodgers and was greatly influenced by him. One of my aunts was dating a boy and he had bought 'Moonlight And Skies' but I never had a chance to see him. Ernest was traveling around in a bread truck for the Gold Chain Flour Company. They’d pull into a little town and sing for about 15 minutes and get back in the truck and drive on to the next town. Ernest Tubb was an inspiration to me, no doubt."

Excerpt from booklet BCD15852 - Charlie Walker Pick Me Up On Your Way Down (5-CD)
Read more at: https://www.bear-family.de/walker-charlie-pick-me-up-on-your-way-down-5-cd.html
Copyright © Bear Family Records