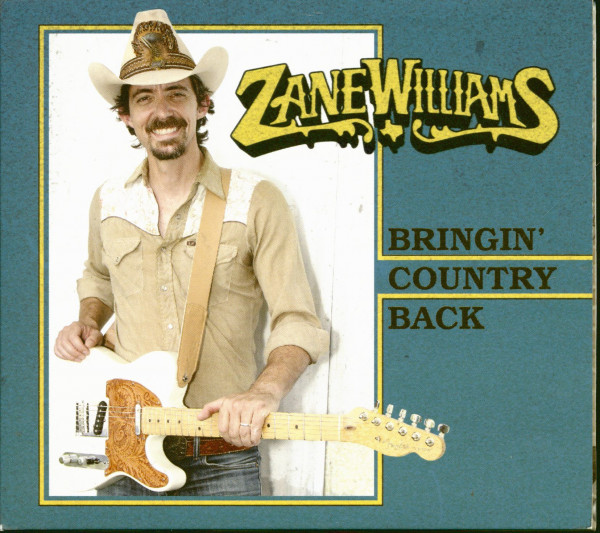 (201Texas Like That) 11 tracks - digipac;
"Bringin' Country Back" is more than a catchphrase for Zane Williams. It is a rallying cry for a return to authenticity and substance in mainstream country music, and a fitting title for Zane Williams' sixth studio album. "I think of country music as poetry for the common man," he says reflectively. "The stories that draw you in, the simple truth stated in a way you wish you could've said... there's an honesty to country music that totally grabbed me the first time I heard it." That plain-spoken, down-home honesty has now become the calling card for Zane's own career, landing him four #1 songs on the Texas radio charts, opening gigs with heroes like George Jones and Alan Jackson, and even an invitation to perform at the Grand Ole Opry in 2015. The genuine quality of his music is no fluke. Born in Abilene, TX, to a pair of college professors, Zane was moved as a child first to Kentucky, then West Virginia, and then California as his parents pursued their academic careers. While he enjoyed singing harmony in church and composing his own instrumental pieces on the family piano, it wasn't until he turned sixteen and got the car keys (and control of the radio inside) that he had his first transformative experience with country music. "I'm flipping stations and I land on Bob Kingsley's Country Countdown one Sunday morning after church, and I hear this guy Garth Brooks singing "The Dance." I had just broken up with my first girlfriend, and that song wrecked me; it cut right through me like no song ever had." Not long after, his parents bought him a used guitar as a reward for good test scores, and Zane began trying his hand at writing his own songs. He was as surprised as anyone to find he had a knack for turning a phrase and telling a story in song. Still, a career in country music seemed far-fetched, so he followed his parents' advice and enrolled as a math major at Abilene Christian University. By the time he walked across the stage four years later to accept his diploma, his hobby had blossomed into a passion to pursue music full time.