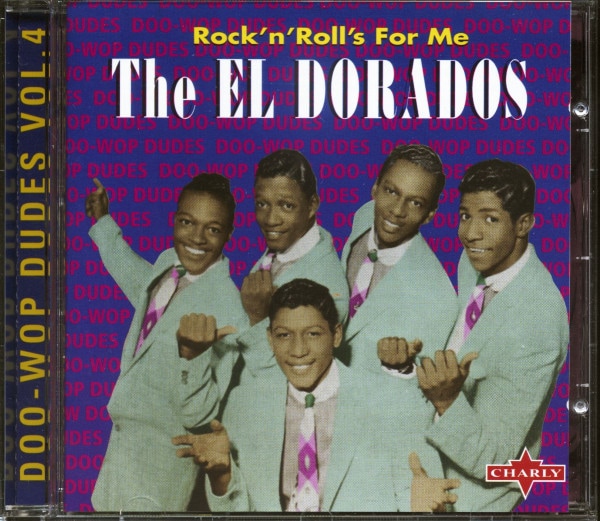 The El Dorados: Rock'n'Roll's For Me (CD)

At My Front Door

Gary, Indiana-based Vee-Jay Records had enjoyed marvelous response to The Spaniels. The El Dorados - named after the top-of-the-line Cadillac model - would follow suit for the company.

Formed at Chicago's Englewood High School in 1952, they were fronted by tenor Pirkle Lee Moses, Jr., born October 4, 1937 in Chicago. Known then as The Five Stars, Moses' partners were tenor Louis Bradley, second tenor/baritone Jewel Jones, baritone/bass James Maddox, and bass Robert Glasper. School custodian John Moore became their manager. Moses and Glasper joined the Air Force; Pirkle Lee came home after 90 days, but Robert stayed in. Moses found Richard Nickens had been installed as his group's new bass, and tenor Arthur Bassett was new too. The Five Stars wouldn't do as a name now, so The El Dorados were born.

Vee-Jay co-owner Vivian Carter rented a skating rink and put her Spaniels up against all challengers; The El Dorados won the contest. When Vee-Jay issued the Moses-led My Loving Baby in July of '54, the label misspelled their moniker as El Darados (Bassett fronted the bluesy flip, Baby I Need You). The El Dorados jumped on the Annie bandwagon on their encore, teaming with Hazel McCollum - reportedly bluesman Robert Nighthawk's wife - with Annie's Answer, rebounding with a Moses-led pairing, One More Time and Little Miss Love, out in March of '55.

On April 24, 1955, The El Dorados cut their masterpiece at Universal Recording. Moses wrote the rocking At My Front Door, but when it was pressed that August, credit went to manager Moore and label honcho Ewart Abner. The band was led by bassist Al Smith, though most of the heavy lifting was done by guitarist Lefty Bates, saxist Red Holloway, and drummer Al Duncan. The opening riff is taut and sleek, Moses providing fine lead work (the jivey Bradley-led flip What's Buggin' You Baby sounds dated by comparison). At My Front Door rocketed to the top of the R&B hit parade in early '56 and managed a #17 pop peak, no doubt tempered by Pat Boone's bland cover for Dot, which went to #7 pop. The song remained a Vee-Jay house favorite, Dee Clark scoring a 1960 hit with it.

I'll Be Forever Loving You, The El Dorados' Latin-tempoed encore, broke into the R&B Top Ten for a week in early '56, but it turned out to be their last success despite the solid follow-ups Now That You're Gone, A Fallen Tear, the At My Front Door answer song Bim Bam Boom (utilizing a very similar riff and incorporating the memorable line "she looked like something from the Brookfield Zoo"), and Tears On My Pillow. Nickens exited in early '56. There was a bigger split the next year, Moses teaming with another Vee-Jay group, The Kool Gents (from whom Dee Clark had just split), to form a new edition of The El Dorados. They had 3 Reasons Why and then Lights Are Low in 1958 before Vee-Jay pulled the plug.

The old group hired future Artistics front man Marvin Smith as their new lead singer and made a '58 single for Academy, A Lonely Boy, as Those Four Eldorados. Moses fronted The Squires on a pair of 1964 singles for Boss (Peanut Butter Sandwich was credited to a solo Perk Lee). There were competing El Dorados groups in the early '70s, Moses' crew appearing on Al Smith's Torrid label while the others cut for Paula. Moses died December 16, 2000. 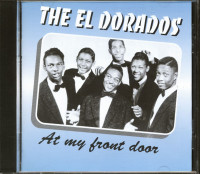