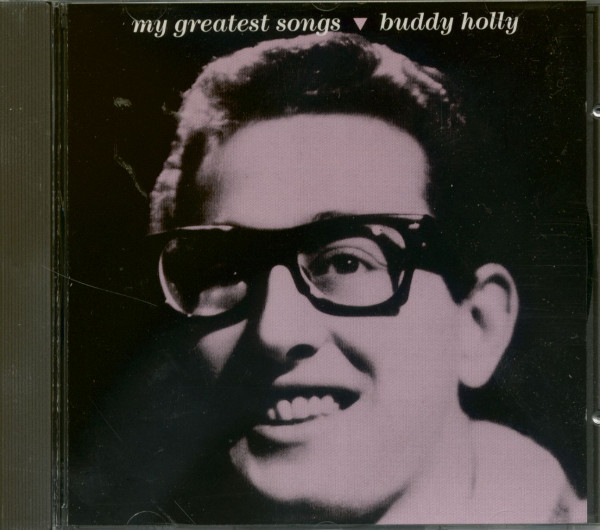 LINER NOTES
On the surface, there was little about Buddy Holly that see-med to qualify him for musical stardom. His family lived in Lub-bock, Texas, on the edge of the de-sert—hundreds of miles from the nearest recording studio. He had a poor complexion, bad teeth and glasses, and, when he sang, it was in a curiously high-pitched voice. But Buddy Holly made a virtue out of being different to the ex-tent that now—when people look back on the '50s—his one of the na-mes and faces that leaps instantly to mind. Charles Hardin 'Buddy' Hol-ley (the 'e' was dropped by the time he signed his first record ap-peared) was born in Lubbock, on September 7, 1936. He grew up li-stening to country music, and pik-king out chords on a cheap guitar. Thousands of kids across the South and Southwest were doing the same thing—but Buddy had two attributes most of them lacked talent and ambition.

He and his friend Bob Montgomery started performing over KDAV in Lub-bock during the early '50s as `Buddy and Bob'. Incidentally, Montgomery shared Buddy's am-bition, and stayed in the music bu-siness. Until recently, he was the head of CBS Records in Nash-ville. It was Elvis Presley who tur-ned Buddy's head around. Elvis played Lubbock twice during 1955, and Buddy was in the au-dience. In the wake of those shows, Buddy started integrating more R&B into his style, and checking out the black radio sta-tions. By the time he made his first set of solo demos, he was sin-ging Joe Turner, Bo Diddley and Little Richard songs, and making some tentative efforts at writing his own. In late 1955, Buddy impres-sed some country stars who swung through town on a package show, and was offered a contract by Decca Records in Nashville early in 1956. Decca, like every other record company, was scurrying around trying to find their answer to Elvis Presley.

Buddy made some fine records for them—inclu-ding the original 'version of "That'll Be The Day" — but not-hing clicked, and he was dropped at the expiration of his one-year term. Down, but not out, Buddy and his group started working at Norman Petty 's studio in Clovis, New Mexico. It was there, away from Nashville's assembly-line at-mosphere, that Buddy Holly dis-covered what was special about his music. He used his own band instead of Nashville sidemen, and Petty encouraged him to exploit the quirkiness of his natural voice.

When they re-cut "That'll Be The Day", Buddy Holly announ-ced his arrival as an innovator. Petty landed a contract for Buddy and the Crickets with Coral Re-cords, and a parallel deal with Brunswick for Buddy as a solo artist. Ironically, both companies were New York subsidiaries of Decca, whose Nashville division had refused to re-new Buddy's contract. The first record covered by the deal, "That'll Be The Day", was a number one smash. Like Fats Domino, Elvis Presley and other true origina-tors, Budd) Holly's records were recognisable from the first few bars. He was wholly in control of his music. He wrote much of it, played guitar, directed the group and sang. In Norman Petty he found a producer who was willing to let him experiment, and one who didn't try to fit him into a pre-conceived mould. Slightly less than two years separated the night that Buddy re-cut "That'll Be The Day", and the night he perished in a frozen Iowa field. He packed a lifetime's accomplishments into those two years; he toured, played televi-sion dates, went overseas, mar-ried, and recorded constantly. He brought an almost unparalleled diversity to his recordings: go-for-broke rockers like "Oh Boy!" and "Rave On", ballads that broke new ground like "Heartbeat" and "Listen To Me"; and simply great pop songs like "Maybe Baby" and "Peggy Sue".

After his marriage, Buddy split from the Crickets and moved to New York. Sensing the demise of primitive three-chord rock 'n' roll, he started exploring new di-rections, such as recording with strings. Perhaps Buddy's flair for experimentation could have su-stained his career. Since his ear-liest days in Lubbock, he had al-ways kept his ears open to diffe-rent styles of music. New York, with the wide range of musics to be heard everywhere from recor-ding studios to open windows, would have provided fodder for his fertile imagination. All those questions remain unanswerable because of the crash of a light private plane car-rying Buddy, the Big Bopper and Ritchie Valens. At the time, Buddy hadn't seen a major hit in over a year, and he was playing in supp-ort of the Big Bopper and Valens, but history takes account of far more than chart statistics. Buddy Holly wielded an influence far beyond the nine hits he scored in his lifetime, and the couple he sco-red posthumously.

He was one of those archetypes who take every-thing they've heard, and meld it into something strikingly origi-nal—a distinction that places him in very select company.
COLIN ESCOTT 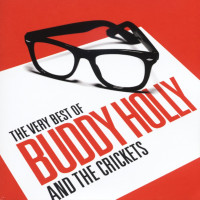 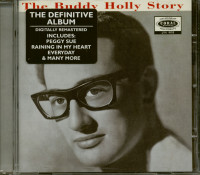 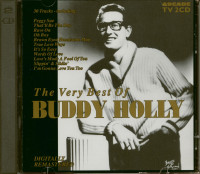 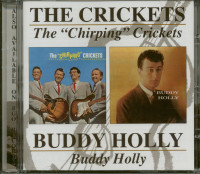