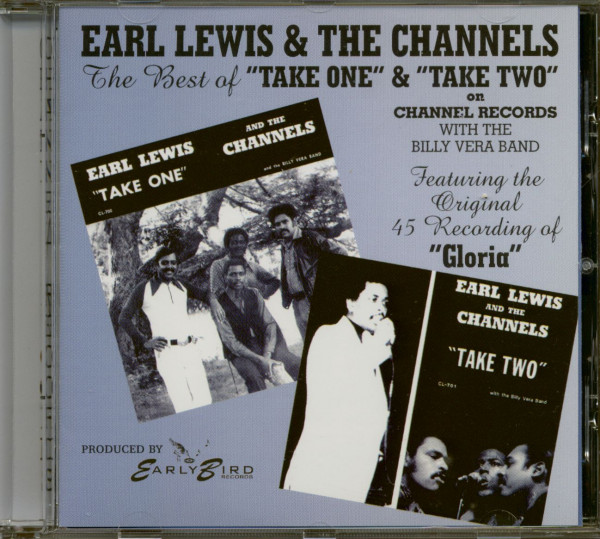 Artikeleigenschaften von Earl Lewis & The Channels: The Best Of 'Take One 1' & 'Take 2' (CD)

My Love Will Never Die

The Channels and their stirring lead tenor Earl Lewis debuted on wax in July of 1956, their The Closer You Are for Bobby Robinson and Jerry Blaine's short-lived Whirlin Disc label establishing a mighty high level of balladry to maintain (it's on our '56 edition of 'Street Corner Symphonies'). But they more than managed on their four subsequent outings for the logo, specializing in polished street corner-style ballads that beautifully typified the Harlem sound.

Lewis and bass singer Clifton Wright were in a group called The Lotharios when they teamed with first tenor Lawrence Hampden, second tenor Billy Morris, and baritone Edward Dolphin in The Channels. After their brief but bountiful year's stint on Whirlin Disc, The Channels shifted over to George Goldner's Gone label to revive the smooth pop oldie That's My Desire in mid-'57. They encored on Gone with another ballad, Altar Of Love, in early '58 before Robinson reclaimed the quintet for his Fury label, which sprang up after Whirlin Disc imploded. Wright wasn't on Altar Of Love, leaving only four Channels on hand to record the song.

The eerie My Love Will Never Die, a thrilling ballad laden with vibrato-enriched guitar and Earl's falsetto flourishes, was half of The Channels' Fury debut (the bouncy Bye Bye Baby occupied the flip). Lewis and the returning Wright were now joined by John Felix and two former members of The Cellos, Billy Montgomery and Alton Campbell. Out in early 1959, My Love Will Never Die sold in New York and surrounding regions, but like all The Channels' sides, it failed to break nationally.

One more outing that autumn on Fury's Fire subsidiary pairing The Girl Next Door and My Heart Is Sad closed out their short encore stint with Robinson. Lewis, the group's heart and soul, exited after that, leaving Hampden the only original member on 1963-65 Channels singles on Hit, Enjoy (another Robinson enterprise), and RCA's rejuvenated Groove imprint.