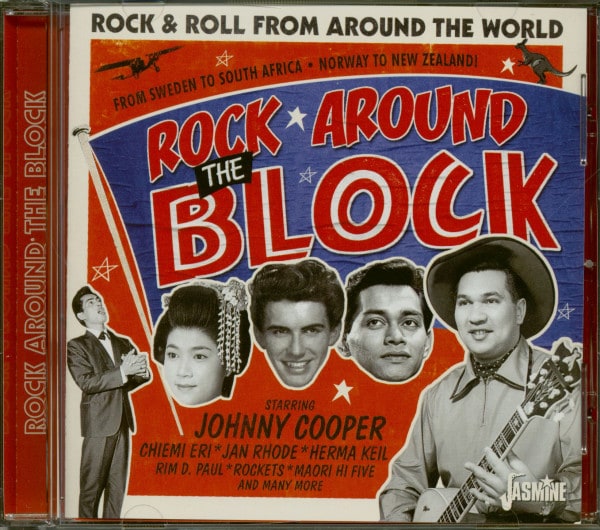 Various: Rock Around The Block (CD)

(Jasmine) 32 tracks
-
Rock Around The Block, a global flight around the breakout countries of the planet taking off from Norway with Jan Rhode & His Cool Cats and landing in Sweden, South Africa , Holland, Japan, Germany,
Hong Kong and Canada to pick up wigged- out wonders like Rock-Boris, Tielman Brothers, and Ronnie Twen & The Perrys. After stops to refuel, on to New Zealand taking a zigzag course and touching down in The Congo. Follow further on your wall-map this crazy trip taking in The Quin-Tikis, Johnny Cooper (“The Maori Cowboy”,) Los Llopis plus a surfeit of others with ants in their pants and heat in their seat.
-
Here you will find 32 examples from 12 rock & roll- infected countries recorded back in the day when th e swing era generation thought that this new and loud rock & ro ll was a passing fancy.
What they really meant was they hoped that by dealing with the problem of so-called juvenile d elinquency, they would be able to stamp out the reb ellious sounds that symbolized the teenagers’ own personal search for freedom