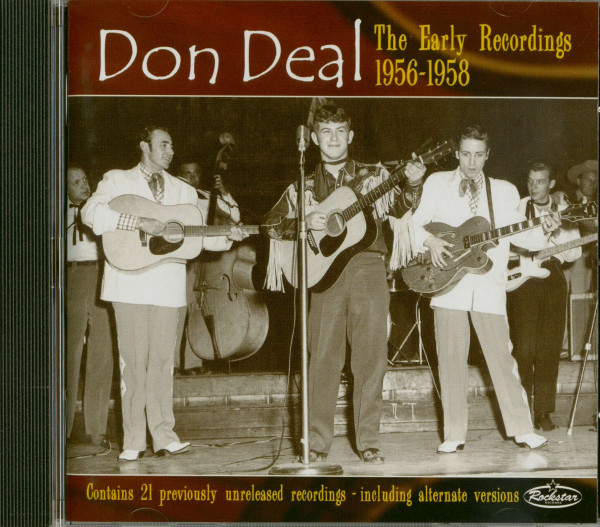 (2006/ROCKSTAR) 35 tracks with 8 page booklet This is the first CD release (outside of America) by West Coast singer/songwriter Don Deal, covering the period 1956-58. Tracks 1 & 2 represent his initial country release where he is accompanied by The Cochran Bros - Eddie Cochran & Hank Cochran, who are seen either side of Don, on the CD booklet cover. The following twelve titles were originally recorded for 'Era Records' of Hollywood, which include a range of styles from rock 'n' roll to teen ballads. Two of these tracks feature Eddie Cochran on lead guitar. The remaining 21 songs are previously unreleased, and recorded at the legendary 'Gold Star Studios'.

Born in Council Bluffs, Iowa, on March 21, 1938, Donald D. Deal had a long career in music that ended with his death in the Branson, Missouri area on June 12, 2009. For most rock 'n' roll fans, he basks in a little reflected glory from having worked with Eddie Cochran. So What is one of the latest recordings on this set, dating to around 1967 (Doye O'Dell recorded it shortly beforehand). By then, Deal had already been on Cash, Era, Capitol, Don-Jim, and MGM. He was an able, if not always reliable, chronicler of his life.

By his account, his parents were farmers who moved to Bell, California in 1952. After school, he worked in a record store owned by Bert Keefer. In the back, Keefer operated a little studio, and many of the local country artists demo'd their songs there. And those local country artists included Wynn Stewart, Freddie Hart, Carl Belew, and the Cochran Brothers (Eddie and Hank). In Deal's self-written biography he said that a songwriter named Tom Reeves hooked him up with an R&B label, Cash Records, although some sources say that Eddie Cochran's pal, Jerry Capehart, made the connection.

Either way, Don made his first recordings for Cash in 1956 with Eddie and Hank on the session, and made several more records for Herb Newman's Era Records (Eddie Cochran played lead guitar on My Blind Date and Don't Push). Meanwhile Smokey Rogers, who'd written Ferlin Husky's hit, Gone, heard Deal singing in Keefer's Music Store, and took him to San Diego to work at the Bostonia Ball Room three nights a week and on a live television show from Tijuana, Mexico five days a week. Show dates were plentiful (Johnny Cash took Deal on the road as his opening act on west coast dates for a couple of years) but the hits remained elusive. Record producer Nik Venet brought Don to Capitol Records, where he recorded the original version of Hank Cochran's A-11 (later a hit for Johnny Paycheck and Buck Owens). When Venet moved to MGM, Deal moved with him. His Sage singles probably followed the MGM record, and came as Fleener was winding down the label. Deal became a songwriter with 4-Star Music and began working the Nevada lounges. He then worked a few years in Nashville as a songwriter (his songs were recorded by Eddy Arnold, Perry Como, Dean Martin, Hank Snow, Sonny James, among others) before moving to a farm near Branson, Missouri, where, as noted, he died recently.