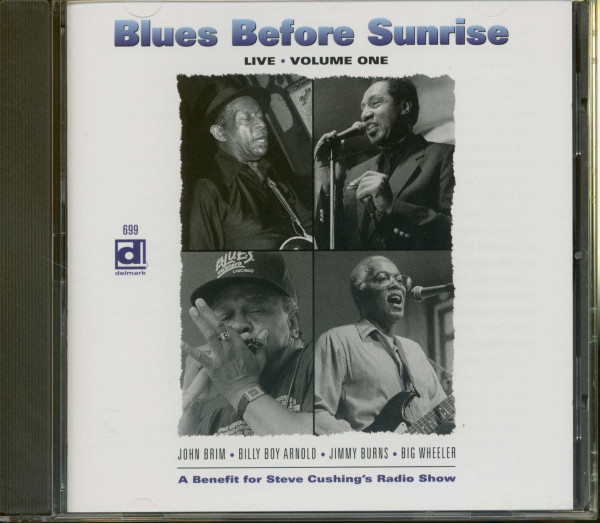 For 17 years DJ Steve Cushing has aired Blues Before Sunrise, the 'Blues Heritage Showcase', over Chicago's public radio station 91.5FM WBEZ, and for the last six years the rest of the country has also had a chance to hear his show via satellite syndication. Broadcast from midnight to 5 a.m., Blues Before Sunrise has long served an audience that includes loyal home listeners, musicians lounging on break, lovers in their living rooms, cab drivers and other service workers pulling the graveyard, and even teen airwave surfers discovering an entire musical world peopled by cats who were hip before them.

Blues Before Sunrise showcases blues as part of a cultural landscape that includes jump and jive, rhythm and blues, swing, doo wop, gospel, comedy, and recitation, and never is the music presented as kitsch or retro fashion in the way that some music has been exploited and trivialized. For Cushing the blues is a living African-American tradition with deep roots.

As a musician himself bearing substantial credentials with Magic Slim and The Teardrops, the Lee Jackson band and Smokey Smothers and The Ice Cream Men, Steve Cushing numbers among his friends and closest associates the artists on this recording-fellow musicians to whom this is a vital, thriving music as well as a means of making a living.

Now gone independent and seeking permanent sponsors, Blues Before Sunrise held a benefit concert at Chicago's B.L.U.E.S. on October 20, 1996 to purchase satellite time to keep the show on the air. The packed-to-the-doors fund-raiser featured artists Billy Boy Arnold, John Brim, Jimmie Lee Robinson, Taildragger, Big Wheeler, Jimmy Burns, Lurrie Bell, Willie Buck, Lester Davenport, Dave Myers, Sammy Fender and others&emdash;each an extraordinary practitioner of Chicago blues and together a full-credit, higher education history lesson in the blues. The portion of the show preserved on this CD is hair-bristling proof of among other things the constancy of the post-war sound and of the vitality of the ever-fruitful Chicago scene.

Vocalist and harp player Big Wheeler leads off backed by Rockin' Johnny Burgin, Dave Waldman and Cushing, as he was on his 1993 Delmark release Bone Orchard (Delmark 661), performing three original compositions solidly in the musical style of his other two selections, Muddy's 'I'm Ready' and Little Walter's 'Got To Go.'

Gary, Indiana native John Brim reprises four of his now-classic Chess sides supported by some of the original Ice Cream Men (named by Illinois Slim when they played behind Otis 'Big Smokey' Smothers who was one, and only coincidently also the name of one of Brim's numbers) Cushing, Dave Waldman, Slim (Tom Morris), and Sho Komiya on bass, and on the last cut, Martin Lange on harp.

Billy Boy Arnold still sounds like the young man he was when he waxed classic 45s 'Ain't Got You' and 'I Wish You Would' in the mid-1950s. 'Streetwise Advisor', a sly paean to the Bronzeville patter of his youth, is followed by a rock-the-house-down musical pastiche that begins as 'Stormy Monday' and leads into a medley of verses from his mentor Sonny Boy (John Lee) Williamson.

Johnny Burgin and The Lazy Boys provide crack period back-up with a contemporary freshness behind both Arnold and Jimmy Burns (they were also the studio band in Burn's recent release Leaving Here Walking (Delmark 694) and they appear with him weekly at Smoke Daddy's). Burns makes Jimmy Rogers' 'You're The One' sound brand new, then closes out in thrilling fashion with the soulful, minor-key title track to his CD, a fitting end that effortlessly stretches the blues boundaries.

These musicians (all of them heard regularly on Blues Before Sunrise) aren't 'revival' acts. They're out there every day playing music that would never occur to them as being 'old' or 'retro' but instead is part of an ongoing cultural tradition.

Put this platter on and spin your own private Chicago blues festival featuring some of the best current practitioners of the genre, courtesy of Blues Before Sunrise and Delmark Records. Then go out and see them live. And afterwards, tune in to the show.

And may the sun never set on Blues Before Sunrise, or the Chicago Blues.