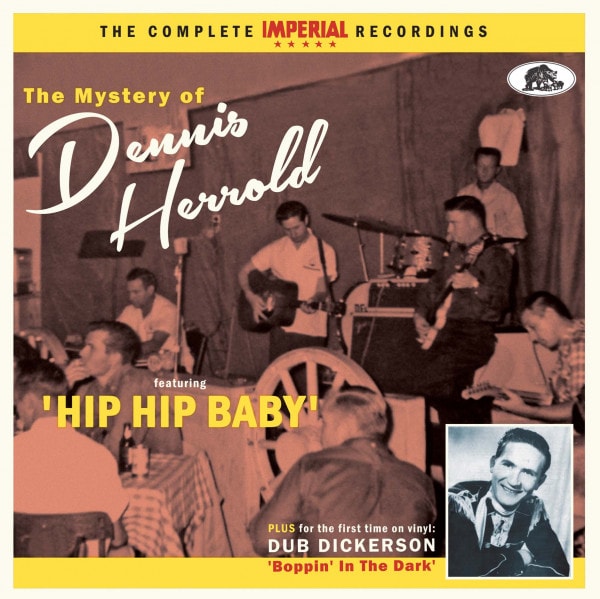 One of the last mysteries of rock 'n' roll

We were extremely pleased when the postman delivered this 10" vinyl released by Bear Family on 1000 copies. Not only because of the limited edition but mainly because this release contains Dennis' complete 'Hip Hip Baby' session and also links him to Dub Dickerson. Maybe you'll wonder what's so special about that. For that we have to go back to the middle of the last century. We wrote 1957 and rock 'n' roll was hot. Every record label wanted to get a piece of this new hype, so they went in search of musical talent. So did Imperial Records. Country artist Slim Whitman, New Orleans' hitmaker Fats Domino and then 17 year old Ricky Nelson were already the showpieces of the Los Angeles based label. In 1958 Dennis Herrold uploaded the classic 'Hip Hip Baby /Make With The Lovin' for that label, which immediately put him in the spotlight. And here comes Willis Douglas 'Dub' Dickerson on stage. Dub got in touch with Dennis and discovered his ambition to make it into music. To achieve this, singer/songwriter Dickerson gave him the two songs, which became Herrold's first, but also his only single. However, the success was short-lived, because after this single Dennis almost disappeared into obscurity. He remained a mysterious figure, who sometimes dared to go beyond the bounds of the law. For a second link between Herrold and Dickerson we have to go back to 'Stood Up', a hit from 1957 by Ricky Nelson. That song was written by Dennis' wife Emma Lee Herrold and Dub Dickerson.
Dennis Herrold died in 2002, Emma Lee Herrold in 2003, Dub Dickerson already died in 1979.
Now, about 6 decades later, Bear Family surprises us with all the recordings Herrold canned on his 'Hip Hip Baby' session. During that same session, the Dickerson under contract at Imperial also recorded 'Boppin' In The Dark', which can also be found on this 10". And as if this isn't impressive enough, you'll get all the songs from the vinyl on the attached CD, completed with 5 tracks. Those are 'Stood Up' in the versions by Ricky Nelson and Tony Wilson, 'Precious' by Bob Luman, 'Falling In Love' by Warner Mack and 'Sugar Lips' by Justin Tubb. Dub Dickerson and/or Emma Lee Herrold are involved in all these songs as songwriters. Moreover, on the four-page appendix, you get for the first time a very complete biography of Dennis, Emma Lee and Dub, written by Alexander Petrauskas. Needless to say, this edition is not to be missed?