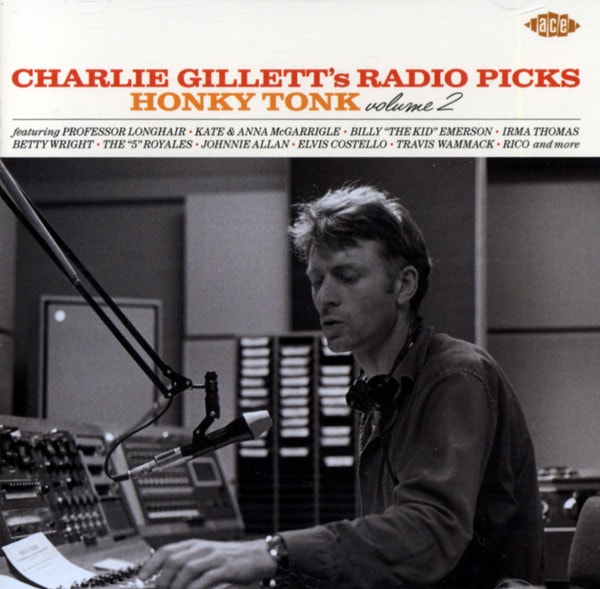 (2014/Ace) 25 tracks (70:55) 28 page booklet.
The received wisdom is that the 70s started with prog rock, were soon inundated with disco and burnt bright and dark with punk rock as the backlash. As with most such wisdom, it is only part of the story. In March 1972 when Charlie Gillett first went on air, the bleak nostalgia of ‘American Pie’ was riding high in the charts, pretty much confirmed by the end of the year with Chuck Berry’s ‘My Ding-A-Ling’. The charts were mostly a mix of schlock, novelty, 60s leftovers and shiny new pop. Particularly shiny were the glam rockers tarted up in tin foil and pancake. Into this scene sailed Honky Tonk, a radio show that ignored the mainstream almost entirely and instead championed mostly American music, although along the way gave a break to Elvis Costello and Dire Straits among many other aspiring UK artists.
Coinciding with the advent of the show, there was a revival of American 50s rock’n’roll, in what turned out to be the dawn of the re-issue business. Whereas there had previously been a sell-the-hits-all-over-again approach to “oldies”, many records that had never had an airing or were long-forgotten were now being heard in well-annotated and intelligently compiled releases. Charlie must take a lot of the credit for this with his seminal book Sound Of The City, which was not afraid to take seriously the business of pop music.
In parallel to the 50s revival there was a wave of vernacular-based pop out of the USA, often with artists who had been around since the 50s and 60s and no longer relied on whatever good looks they once had to sell records. Instead they sold records by making very good ones. Doug Sahm, Dr John, Allen Toussaint and Travis Wammack all had career boosts around this time. These were the artists, rooted simultaneously in authenticity and pop – well, at least a good tune – who Charlie championed. Another element of his playlists was soul, the music that had captured young hearts in the UK at the dawn of R&B and remained at the centre of British taste – vibrant, totally up-to-date and not much to do with disco. Alongside this was the narrative tradition of country that still thrived and was yet to fall into assembly line mode.
This was Charlie’s milieu and by the time the Honky Tonk theme played on Radio London for the last time at the end of 1978, punk rock had pretty much been and gone, Rod the ex-Mod was being sexy, disco continued banging on and Charlie was still playing great records.(Roger Armstrong)