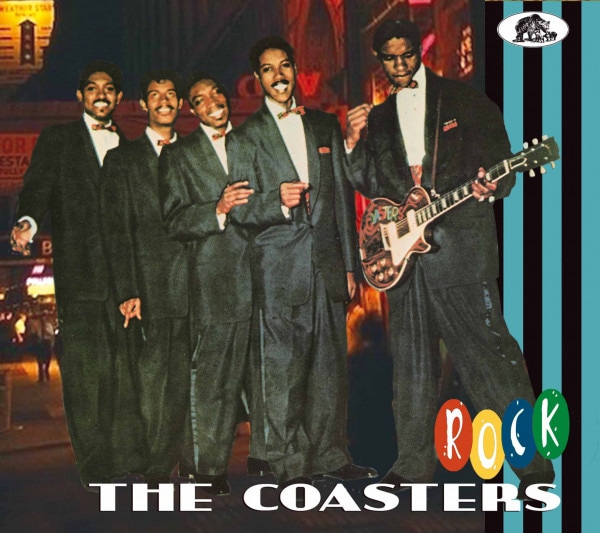 The Coasters were created in 1955 from the nucleus of a Los Angeles based group, the Robins. They were the agents through which Leiber and Stoller marketed some of the most entertaining songs of the Fifties. Founder member Bobby Nunn had led the Robins through numerous West Coast labels, recorded with Johnny Otis on Savoy, and had a hit with Little Esther Phillips, 'Double Crossing Blues' (1950), before teaming with Leiber and Stoller on RCA in 1953. When the writing and producing duo formed their own label, Spark, a year later, they scored several local hits with the Robins, notably 'Riot In Cell Block No. 9' (featuring Rich-ard Berry), 'Framed' (Nunn), 'The Hatchet Man' (Nunn), and `Smokey Joe's Café' (Carl Gardner).

Eight cuts from this period were later included on the first Coasters' album and have subsequently been regarded as Coasters' record-ings. Attracted by the success of `Smokey Joe's Café', Atlantic signed them to their subsidiary label, Atco, retaining Leiber and Stoller as the creative force behind the group. Gardner and Nunn, with newcomers Billy Guy and Leon Hughes (also from California), were renamed the Coasters and achieved widespread popularity with their first releases `Down In Mexico' and 'One Kiss Leads To Another' (1956), followed more emphatically by `Searchin' rYoung Blood' (1957) — a Top Ten pop hit. After three less successful outings, Nunn and Hughes were replaced by Will `Dub' Jones and Come! Gunter who, with Guy and Gardner, formed the quartet that recorded all the other famous Coas-ters' hits : `Yakety Yak' (1958) — their only No. 1— 'Charlie Brown', 'Along Came Jones', 'Poison Ivy' (1959), and 'Little Egypt' (1961).

The arrangement of these records used the differing character of each singer's voice to full effect around a catchy guitar figure (often Mickey Baker) or a fruity sax break (King Curtis). The production, particularly on the Robins' and early Coasters' releases, was far superior to any

Even The Coasters, clown princes of rock and roll, were in a spicy Latin mood. That was the doing of their Atco producers, Jerry Leiber and Mike Stoller, who were enjoying much success applying saucy baion rhythms to the output of The Drifters.

After a stellar 1959 that found them crashing the pop Top Ten three times with the Leiber/Stoller comic playlets Charlie Brown (it's on our previous disc), the Western sendup Along Came Jones, and Poison Ivy, The Coasters cooled off in '60. Their top seller, Wake Me, Shake Me, didn't even crack the Top 50. Another 1960 release, the ghetto vignette Shoppin' For Clothes, was credited to Leiber and Stoller but was an uncredited adaptation of Boogaloo and His Gallant Crew's '56 release Clothes Line (Wrap It Up) on L.A.-based Crest Records. Boogaloo was actually its writer, Kent Harris (eventually authorship was credited to all three).

Closest to the doo-wop tradition was their '60 update of Besame Mucho, the 1940 work of Mexican songwriter Consuelo Velazquez (Sunny Skylar added English lyrics; the title translates to Kiss Me Much). Bandleader Jimmy Dorsey had a huge hit with it in 1944; The Ray-O-Vacs' Decca version went to #5 R&B in 1950. The Coasters' update was done February 26, 1960 at Atlantic's New York studios and spread over both sides of a single. Part 1 rides a surging Latin undertow, bass singer Will 'Dub' Jones stepping up for a rare lead turn (an entirely serious one at that). Carl Gardner, Billy Guy, and Cornel Gunter join in for the bridge, and sax master King Curtis unleashes a barrage of yakety licks near the fade. Fans must have been perplexed; Besame Mucho only made a #70 pop impression that spring.

The Coasters never regained their chart domination, though they did have '61 hits with Little Egypt (Ying-Yang) and Part II of Girls, Girls, Girls. They remained on Atco into the mid-'60s, ex-Cadillacs lead Earl Carroll joining in 1961 and Gunter exiting. A move to Columbia's Date label didn't reverse their fading fortunes. A bewildering array of Coasters groups toured the country from the '70s on. Gunter led one, Gardner another, and there were plenty more with no one recognizable at all. Carl fronted his until shortly before his June 12, 2011 death from heart disease. Gunter was shot to death in his car in Las Vegas on February 26, 1990. Diabetes killed Jones on January 16, 2000, and Guy died November 5, 2002.

Great as The Coasters' hitmaking legacy was, Gardner dreamed of a different career. "My regret is that I didn't get to sing the type of tunes that I would like to have sung, such as a lot of pop things," he said. "I would like to have done a lot of pop, like 'Stardust,' 'Mona Lisa,' 'Willow Weep For Me' things. And jazz, scatting, whatever. But it didn't sell. So a person must go where the bread is."

In the 1950s, doo-wop groups shot up like mushrooms in the US. For many of them, fame was limited to their homeland and others even had to make do with a rather local fame. One that stood head and shoulders above this was definitely The Coasters. The Coasters were founded in 1955 around lead singer Carl Gardner. Their humorous songs made the band unique, so they were virtually free of competition. Moreover, they were able to appeal to songs by the well-known writers duo Jerry Leiber and Mike Stoller. They were also responsible for their biggest hit 'Yakety Yak', with which The Coasters gained world fame. If the songs of other doo-wop bands often had teenage lovers or broken hearts as subjects, The Coasters sometimes took a completely different tack. A good example of this is their other big hit 'Charlie Brown' also a Leiber-Stoller composition. That composer duo would give them even more excellent material. Dance!', 'Three Cool Cats', Poison Ivy', 'I'm A Hog For You', 'Girls, Girls, Girls' or the clownish brought 'The Shadow Knows' are just some of the 'Leiber/Stoller' songs that can be found on this album. The Coasters also knew like no other how to connect doo-wop and rock 'n' roll. This can be heard immediately in the opener with the appropriate title 'That Is Rock And Roll'. Originally surprising The Coasters come out of the corner with their version of the classic 'Besame Mucho', while 'Ridin' Hood' floats on a delicious rhythm & blues groove.
Besides the above mentioned hits, you'll also find some less known, but no less tasteful songs on this compilation. This album, which is part of the Bear Family released 'Rock' series, contains all the uptempo songs The Coasters recorded for Atco Records between 1957 and 1962. All this, complemented by the 36 pages richly illustrated booklet with liner notes by Bill Dahl, makes this compilation a not-to-be-missed release.

Boom! I was hoping that Bear Family would include The Coasters in their fabulous 'Rock' series and finally here we go! A great mixture of hits and lesser known songs! I really dig the stereo version of 'Three Cool Cats'! Great stuff!

The Coasters - Rock! Bear Family BCD17526
Hot on the heels on the fabulous Scotty McKay release is another welcome ‘Rocks’ cd, this time by the much better known Coasters. The Rocks series perfectly capture the great rocking sounds that came out of the US in the 50s and have mixed well known artists like Little Richard and Jerry Lee Lewis with more marginal acts like Scotty McKay and Rusty York.
The Coasters, coming like a phoenix from the flames of the Robins, were signed to Atlantic’s sister label, Atco, in ‘55 and in January ’56 cut the magnificent ‘Down In Mexico’ and ‘Turtle Dovin’ to become the first classic of the group – and every three or months there was another, just as good, throughout the ‘50s and early ‘60s. Listening to the CD it’s a crime that songs as good as ‘I’m a Hog For You Baby’ and ‘Bad Blood’ were hidden on the flip-sides. But they were.
So does the world need another Coasters release, particularly as this CD retails at £14 and there are £5 boots available? The answer is a resounding ‘Yes’. Containing 32 of their uptempo releases the cd effectively works as a ‘best of’ and so much more. Included are the evergreens ‘Searchin’, ‘Yakety Yak’ and ‘Charlie Brown’ along with classics like ‘The Shadow Knows’, Lieber and Stoller’s ode to the clap, ‘Poison Ivy’ and ‘Ain’t That Just Like Me’. For me the cd is made by the inclusion of songs like ‘Idol With the Golden Head’, ‘Dance’ and ‘Gee Golly’ – all should and could have been hits.
Like all the Rock series, the generous booklet is crammed full of photos including a great one of them appearing on Wink Martindale’s show – showing how good RnR was at breaking the racial divide. Bill Dahl takes care of the liner notes and carefully explains the comings and goings of the members of the band that, for me, was the best of them all.

29,95 € *
mehr Informationen
Alle "The Coasters" Artikel anzeigen
Presse Archiv - The Coasters - Rock - musikreviews
Presse Archiv - The Coasters - Rock - musikreviews Natürlich fehlen in der klangtechnisch wieder sehr gut gemasterten Zusammenstellung die großen Erfolge wie „Searchin'“ oder „Charlie Brown“ nicht, denn auch die haben echtes Rock-Potenzial. Für Sammler aber werden die zahlreichen Raritäten, die ebenfalls auf der CD vertreten sind, besonders interessant sein. Selbst gänzlich unbekannte Titel wie „Gee Golly“, „Thumbin' A Ride“ oder „Teach Me How To Shimmy“ lernen wir auf der „Rock“-Zusammenstellung kennen, deren älteste Songs aus dem Jahr 1956 und die jüngsten aus 1962 stammen. FAZIT: Getreu ihrer Label-Philosophie bieten Bear Family Records mit der Fortsetzung ihrer „Rock“-Reihe ein weiteres historisches Prachtstück mit rockigen Titeln – insgesamt 31 – und einem informativen 36-seitigen Booklet an, das neben dem guten Mastering auch jede Menge rare Songs zu bieten hat. Dieses Mal dürfen THE COASTERS bärisch rocken!
17.05.2020
Presse Archiv - The Coasters - Rock - Now Dig This
Presse Archiv - The Coasters - Rock - Now Dig This Away from the cuts penned by Jerry and Mike, the two obvious standout tracks are the group's handling of the standards 'Brazil' and 'Besame Mucho', both of which they inject with enough grooviness to make them sound like they were brand new. The material here is so familiar that there's really no need to go into any further detail. We all have our own faves and, away from the obvious hits, mine would have to include the superb 'Turtle Dovin", the split-tempo 'Down In Mexico', the daft Run Red Run' (one of Jerry Leiber's finest lyrics) and the aforementioned 'Brazil' (those harmonies!!!). Shame they couldn't find room for 'Hey Sexy' and 'The Slime', but you can't have everything. The accompanying 36-page booklet is loaded with trade ads and photos (though that's not the 1958 line-up as listed on page 14) plus a detailed essay by Bill Dahl and full session info. Trevor Cajiao
14.07.2020
Presse Archiv - The Coasters - Rock - Goldmine
Presse Archiv - The Coasters - Rock - Goldmine The latest entry in Bear Family Productions "Rock” series is The Coasters Rock and, boy, they ain’t kidding. Complete with fascinating booklet of information and pictures, these 32 tracks, sounding as great as ever, run the gamut from the opening “This Is Rock and Roll” to “Three Cool Cats” (The Beatles loved this one so much, they just had to record it too) to “Young Blood,” “Down In Mexico,” “Poison Ivy,” even “Besame Mucho” (another Beatle favorite). There’s no pot holes on this super-fine highway of hilarity.
10.07.2020
Ähnliche Artikel Kunden kauften auch Kunden haben sich ebenfalls angesehen
Ähnliche Artikel
The Drifters: The Drifters - The Drifters Rock (CD) Art-Nr.: BCD17278 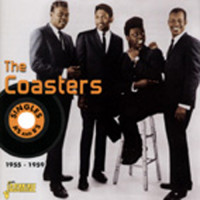 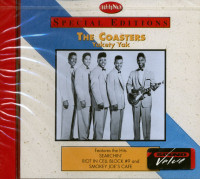 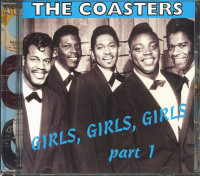 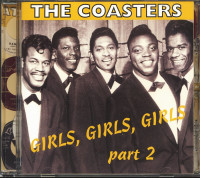